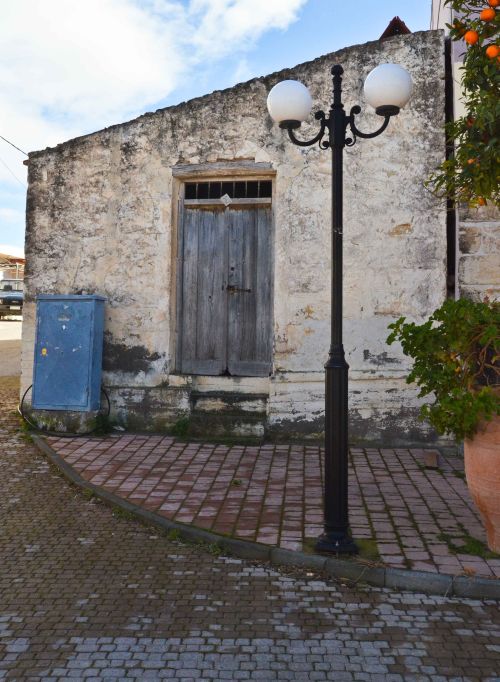 The village Aitania is located 20 km from Heraklion.

Every year on August 15 the local cultural association celebrates the Feast of the Assumption of the Blessed Virgin Mary and organizes a Cretan feast in the picturesque village square.

The village Aitania is built on a hill west of the village of Episkopi and east of the river Karteros with sea view. The Church of the Assumption dominates the landscape. There is also another church in the village, called the Transfiguration Church. It was built in 1997 on the foundations that existed from the beginning of the century. The three chapels of St. John, the Birth of Mary and of St. Paraskevi, which dates from the 13th century make the visitor feel religious devoutness.

Nature lovers, can take a unique hiking in the path of the  " Karteros - Aitania Canyon " After Kainourgio Horio and 21 km from Heraklion, lies the village Galipe. Built on a hill at an altitude of 280 meters, houses overlook the opposite Episkopi and the sun setting behind the Mountain Psiloritis. The village is small, with about 150 residents, most of them engaged in agriculture (vineyards, olive).

A walk through the narrow streets of the village takes you to the old church of Aghios Nikolaos (St. Nicholas), where a crown from 15 century is exhibited. In the church of the Assumption is a Venetian funerary monument of the 16th century with reliefs that evoke its Venetian past. Galyfa
On the plateau at the top of a hill and the hill just 25 km from Heraklion you will find the village Galyfa. It has about 150 residents all of them calm and welcoming.

The village offers magnificent views of the surrounding hills, spring filled with countless colors and aromas from all sorts of flowers, olive trees, bushes, sage and marjoram and thyme.
Agriculture (vineyards and olives) and livestock are the main occupations of the residents.

Galyfa has been inhabited since Minoan times as it is indicated by unofficial findings in the village and the nearby peak sanctuaries, as in Smari and Episkopi.

Traditionally, the biggest event in Galyfa is on the Day of the Holy Spirit, the day when the Church of Aghia Triada (Trinity Church) is celebrated. Many go to church and spend the night and in the morning they participate in the Divine Liturgy and feasting. Also, a big celebration takes place on 8 November (feast of the Archangels St. Michael and St. Gabriel). The village of Episkopi is located 18 kilometers southeast of Heraklion from an exit at the 8th kilometer of the National Road Iraklion - Agios Nikolaos. The village offers something different than the hectic pace that usually offer the tourist resorts.

Inside the village there are the Byzantine churches of Archangel Michael, St. Paraskevi and St Ioannis with frescoes. Particularly in St Ioannis are very well positioned murals among which stands out the one of Christ ascending to heaven. On November there is a public holiday for the celebration of St.Minas, the patron saint of Episkopi, a very popular event for the visitors.

Visit the Battle of Crete and Ethnology Museum where the view of the exhibits bring to life memories of heroism and selflessness. There you will find Captain Michael Argyrakis, founder and owner of the museum.

You can walk through the Municipal Park “G. Panayiotakis” a modern leisure proposal, a real green oasis.

The area of Episkopi has been inhabited since the Minoan period. Antiquities from the Middle Minoan period to the Ottoman era were spotted. In Episkopi there are also Venetian monuments like the "Tower" and vaulted tank from the Byzantine period. During the revolution of 1897, in the battle that took place in Episkopi the Leader Antonis Trifopoulos (or Trifitsos) was killed on 25th June and the whole island of Crete lamented his glorious death. Kainourghio Horio is a small village located 17 kilometers east of the city of Heraklion and is a very old settlement. It is a rural village, the inhabitants deal mostly with the cultivation of the vine, wine, cereal cultivation and breeding of animals.

From documents found by the period of the Venetian rule, the village has a rich history over the wine. The area was making too much good quality wine. Do not forget to stop by the Museum of the History of Wine. The Venetian vine presses will make great impression.

During the Venetian rule Kainourgio Horio was the seat of a feudal lord. Sgourokefali is a village with 450 inhabitants and is located at the 19th kilometer on the road to the monastery of Agkarathos. The main occupation of the inhabitants is viticulture and olive growing.

According to a popular saying, the village was named by a shepherd who was called Sgouros (curly) and who was the first villager who built a house on the hill, which is called “the head”. That’s where the name the Head of Sgouros came from, which became later Sgourokefali.

In the village, there is the two-aisled church dedicated to the Holy Trinity and to the Annunciation. Just outside the village there are the churches of St. Marina, St. Georgios, St. Ioannis, Church of Transfiguration and St. Nicholas with well-preserved frescoes. Skopela
Old settlement in the Municipal Unit of Episkopi, built on a hill, at a distance of 20 km from Heraklion. The name is due to Skopelos, last name of the first settler of the village. The village Stamni (pitchers) is located in an altitude of 290 meters 17 km from Heraklion. People who live here struggle to keep this settlement alive. They cultivate the land winter and summer and the well temperate Mediterranean climate rewards them with top quality wine and olive oil.
In Stamni can be found to find a beautiful Municipal hall for cultural events and leisure. 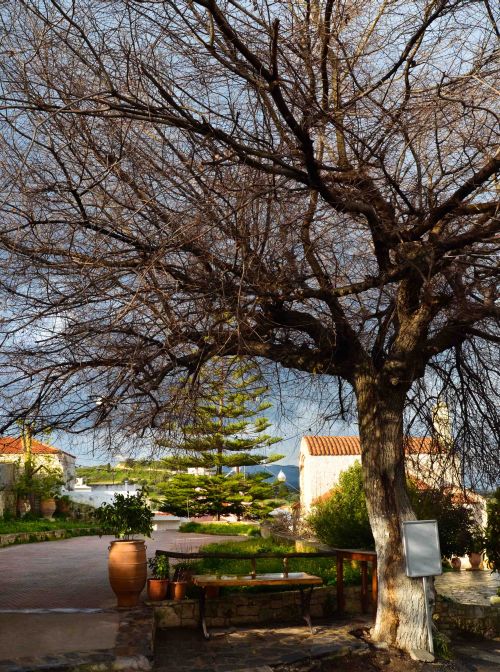 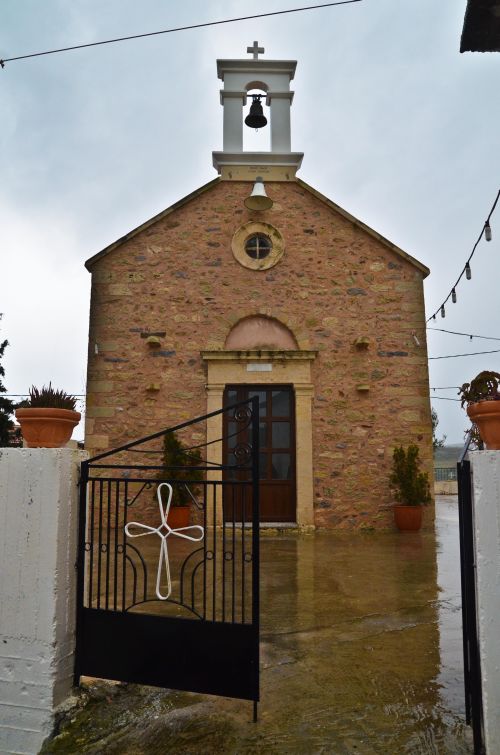 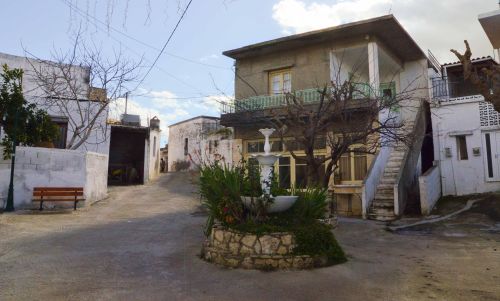 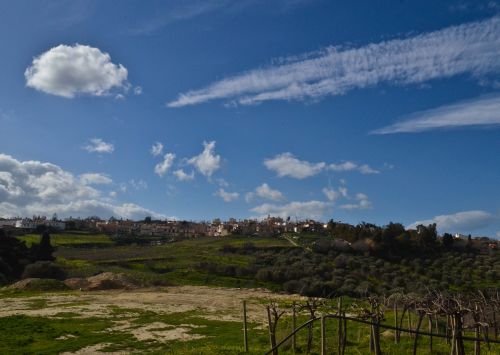 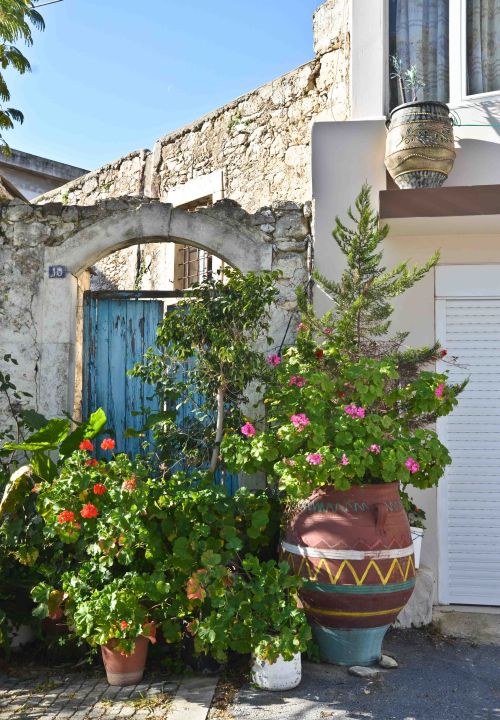 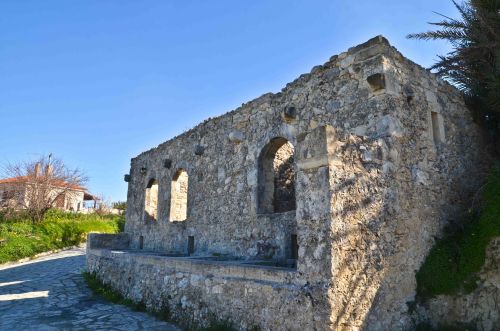 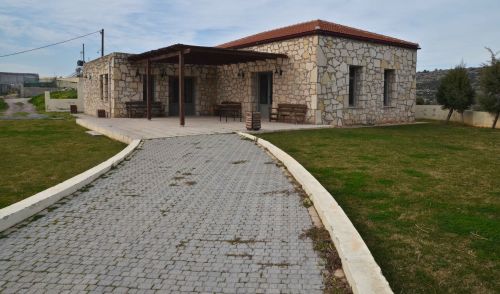